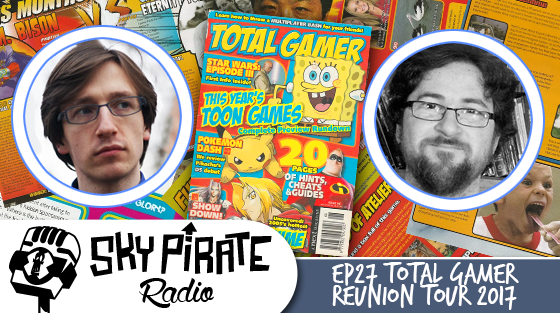 Sky Pirate Radio is back, and this time we brought some very special guests with us – games critic and scholar Dan Staines and cartoonist Patrick Alexander! (hyperlink name to his twitter) We discuss what they have been up to recently, including Patrick’s upcoming Tobias & Jube comic and Dan’s work at Concordia University in Montreal, before getting down to the nitty-gritty discussing both Dan and Patrick’s work in the unrelentingly hilarious and irreverent video game magazine Total Gamer, as well as the importance of its predecessor GBA World. We also chat some about the rise and fall of their website and semi-Total Gamer sequel Eegra, before topping of with a discussion about the importance of managing creativity and marketing to make a living doing the things you love.

TL;DR, Jace fanboys out for an hour and twenty minutes.

If you’re unfamiliar with Dan and Patrick’s work on Total Gamer and GBA World, you’re in luck! Jace has prepared a crash course on them with scans of stuff we mentioned in the podcast right here!